Tuesday's election results demonstrate that a majority (albeit a slim 51%) of Americans have decided to reach for excellence once again after a long period of darkness. Let's hope that Barack Obama will be given the chance to try to implement his vision for a modern compassionate USA. It'll be touch and go though, not only because of the economic disaster left him by Bush and his Republican cronies, but also because of Bush's two ongoing wars which are a severe drain on U.S. resources. Let's not forget that Bush doubled the American national debt in just eight years, and it was enormous even before he took power. Obama's agenda is very ambitious, especially for a country with a population so many of whom are unwilling or unable to face modern reality.

There haven't been many politicians over the years who've inspired as much hope for change as Barack Obama; Roosevelt, the Kennedy brothers, Pierre Elliott Trudeau. The forces of mediocrity and stagnation are powerful, and media and public loyalty is very short. Let's keep our fingers crossed! We all need renewal, especially here in Canada.
Posted by George Wolf at 13:37 No comments:

A Quiet Fall Evening in Victoria

Two days after the Harper Gang's $300,000,000 boondoggle that resulted in their being re-elected with a whopping 37% minority (that's Canadian democracy for you), this happened in my driveway. No other major city in Canada can boast of wild life wandering in safety among its citizens. The sight did a lot to calm my anger at what had just happened. So I'm posting these pictures here to separate my future postings from what I've been feeling since that Tuesday after Thanksgiving. Enjoy... 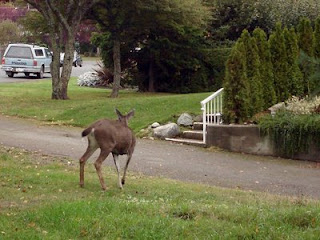 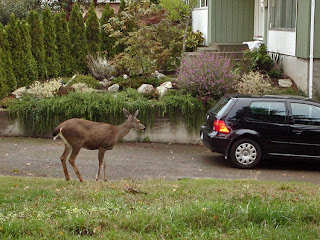 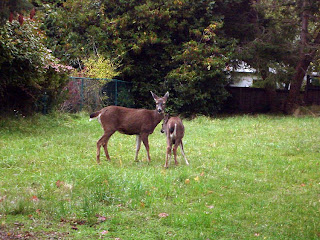 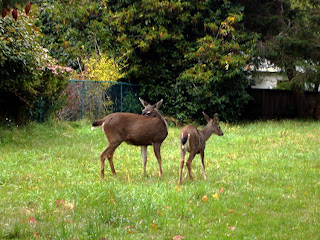