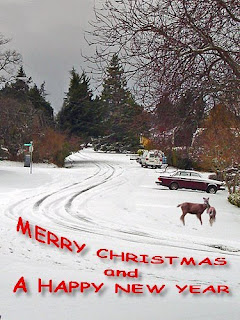 Not just winter, but a massive winter. It started on December 14th with this snowfall - more snow than we got all last winter in this part of town, and winter was still a week away. It meant a first cancelled pre-Christmas event because there are almost no snow ploughs in Victoria. This quiet street, my street, became a skating rink for a week by the end of this day.

The next big snowfall came today, cancelling a Christmas tree trimming party. Another major snowfall is forecast for Christmas Eve, not a good omen for that evening or for Christmas Day.

I moved to Victoria to get away from snow, and I was promised eternal sunshine. Just goes to show you, you can't trust anyone! :-)

Merry Christmas to you, and a Happy New Year!

It's clear, for Canada to remain a parliamentary democracy, the megalomaniac from Calgary has to go, but the Liberals, too, have to make some serious changes. The most important one, and one that needs to be made sooner rather than later, is to choose a new leader.

There's no doubt that Stéphane Dion is a highly intelligent and honourable man, and a true Canadian, but we've all seen that's not enough in today's politics. Even in the seventies, to be intelligent and honourable was not enough, otherwise Robert Stanfield, then leader of the Progressive Conservative Party, would not now be called "the Greatest Prime Minister Canada Never Had". He was no match for Pierre Trudeau. Sadly, neither is Dion a match for Harper, Layton, or Duceppe.

The Liberals need a strong leader, an excellent communicator, a man with not enough baggage to be a target for Harper's constant attempts at character assassination and lies. It's sad that so many Canadians are so uneducated, unintelligent, not to say stupid or prejudiced, that they can't see the true character of a quiet man. The only way to fight that is to give them what they want, but someone also with intelligence and integrity and vision - something the Conservative Party has not been able to do. It's important that the new leader be chosen during the next few weeks, before Parliament is recalled, so that the Progressive Coalition can do its work, hold Harper's feet to the fire and if necessary to replace him.

My choice is Michael Ignatieff, not because I prefer him to Bob Rae (who is equally intelligent and qualified), but because he'll be able to cut Harper down to size more easily. He presents a smaller target to the forces of reaction who've demonstrated already they're willing to risk national unity and at the same time to attack even Canada's Head of State (as represented by the Governor General) in their desperate attempt to foist their neo-conservative social and economic agenda on Canadians.
Posted by George Wolf at 00:54 No comments:

THE MEGALOMANIAC GETS A REPRIEVE

Given the increasingly divisive campaign by Stephen Harper to save his job rather than do it, the Governor-General today made the only decision she could. Each option she had came with positive and negative aspects. Prorogation was her only option, if she wanted to avoid a nasty constitutional crisis which would not only have threatened the office of Governor-General but our federation itself. Not only had ministers already begun to attack the office of our Head of State (fully knowing that the average Canadian has no idea how the parliamentary system of government works), but were also beginning to call anyone who disagreed with their position "traitors" to Canada.

This attack on our Canadian democratic institutions had become very clear from the lies and distortions of the Neo-Conservative Party's playbook followed faithfully by the usual pit bulls of the party from Alberta and from the survivors of Mike Harris' failed Ontario extreme right-wing government of the nineties. What saddened me is the fact that even Conservative MPs who had until now demonstrated that, despite political partisanship, they were intelligent enough to put the unity of Canada ahead of narrow political gain, allowed themselves to be co-opted by the perversion of democracy which is Harper's aim.

Unfortunately, if you look at Canadian political history, whenever Canadian unity has been threatened, a Conservative prime minister is at the bottom of it going right back to John A. Macdonald. If you don't believe me, you can look it up - Macdonald, Borden, Mulroney and now Harper.

What today we can forgive historical figures, we cannot forgive Stephen Harper. His only goal is political power. His strategy is continual lying, not only last night during his 4 minute 50 second lie, but even this morning when he left Rideau Hall. He does not appear capable of ever telling the truth about anything. I suppose that's part of his fundamentalist religious upbringing.

GET THEE TO A NUNNERY!

My next planned entry was supposed to be about Proportional Representation as a way to increase the interest of Canadians in voting. If many Canadians feel they have no voice because their votes don't result in parliamentary representation, PR could be a way to motivate them to exercise their political responsibility. But, that's been overtaken by the current goings-on in Ottawa.

I didn't believe Stephen Harper when he promised during the election campaign that the next parliament would be more civil and would get things done. Why didn't I believe him? Because of his record ever since he first arrived in Ottawa on the tails of Preston Manning in the last century, particularly since he became the leader of the Neo-Conservative Party. As Prime Minister, he has broken most of the promises he's made, and every time he opens his political mouth out come lies and bile and character assassination. How can anyone trust such a person?

The so-called Economic Update was no such thing, of course. It contained nothing of the kind of economic stimulus required and provided by other industrialized countries. Instead, it was a document full of neo-Conservative cant designed to restrict the rights of women and unions, and to cripple opposition parties by removing their financial base (public support was the basis of political funding reform decided on by Parliament only a few years ago). In other words, it looked like a way to maintain himself in autocratic power without the bother of having to deal with dissent. Speak of Canada on the way to becoming a banana republic!

Since the Neo-Conservatives are in a minority position, under our parliamentary system the opposition has a perfect right to form a coalition to defeat the government, and, forced into a corner by Harper, they had no choice but to react or roll over and play dead. So, the current turmoil is no one's fault but Harper's alone.

The real problem Canada is now faced with is that Harper is turning what is a constitutional question into a political campaign designed to destroy not only the other political parties, but also the office of Governor-General. This is being done in the same way that Harper used during the recent election campaign, through a deliberate policy of lies and distortions of what's going on to confuse and influence unsophisticated people who were never educated in the way our constitution works.

In this, he's helped by all the media, who are adding to the confusion in the same way they added to the world financial crisis by bleating 24/7 "THE SKY IS FALLING". If you create hysteria, of course you'll get it!

All I can say to all this is to use a beautiful Shakespearean phrase (and isn't this just like a Shakespeare drama - with bad English). Stephen Harper, GET THEE TO A NUNNERY, and don't wait for spring, DO IT NOW!
Posted by George Wolf at 09:30 No comments: