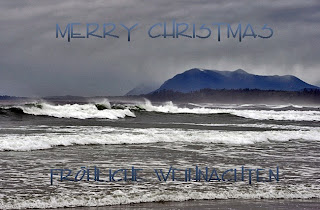 I was going to blog about my disgust with the neo-conservative geniuses who are diminishing Canada's standing in the world with every breath they take, but why bother? Two thirds of Canadians know all about them, and one third of Canadians are them! And eventually they'll be fixed. ;-)

So, let's just forget about the mess we're in for now and enjoy the shopping season, after all we're helping the economy, so they say. Merry Christmas and a Happy New Year to all!

On the other hand, let me add a few thoughts about Harpocisy anyway:

On December 18th, Canada received the Fossil of the Year award at the climate change conference in Copenhagen.

Once again Harper has demonstrated clearly that he is both a national and an international disgrace. There was a time, for about 45 years during and after World War 2, when Canada punched above its weight - in other words, because of what we did and said, we had an influence far above our small population.

That time is sadly long past, but under Harper, we've slipped to near the bottom of the pile among developed countries. For four years now, we've had a government that has only one, ONLY ONE, concern - getting a majority. Nevermind if the country falls apart in the meantime.

I guess we should be glad in a way, that Harper bothered to go to Copenhagen. Those few foreign leaders who still care about what Canada says and does were able to get another look at him. After all, he did go to the state dinner, couldn't be bothered to attend the climate change negotiations though.

Of course, there was no need for him to try to participate there - he has nothing to contribute. After all, he has no environmental policy - oh no, I forgot, his policy is the US policy. Of course, the US has no policy (forget Obama's speech, anything he proposed has to be passed by Congress, which is owned lock, stock and barrel by the US energy industry, the pharmaceutical industry, the military manufacturing industry). So not much, except the tone, has changed since the Bush years.

Canada, though small, is one of the richest countries in the world. Canadians produce more waste and pollution per person than any other country, including Americans. Therefore, Canadians have a greater responsibility to clean up their act than anyone else (and that clean-up includes the Tar Sands). It's not the total pollution, stupid, it's the per capita pollution. Fossil of the Year, indeed!
Posted by George Wolf at 22:10 No comments: