And now for something completely different!

Since this video was uploaded in March 2010, it has been viewed almost 7,000,000 times. See if you can watch it without either laughing or crying!

Here are some of the things his father had to say about the little video:

"This is 3 year old Jonathan conducting to the 4th movement of Beethoven's 5th Symphony. This DGG recording was conducted by Herbert von Karajan and played by the Berlin Philharmonic Orchestra, one of Jonathan's favorite conductors and orchestras. Jonathan's passion for classical music became apparent when he was only eight months old. Shortly after that he began conducting on his own."
Posted by George Wolf at 12:27 No comments:

An Act of Civil Courage 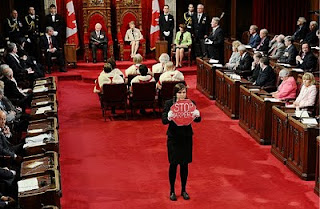 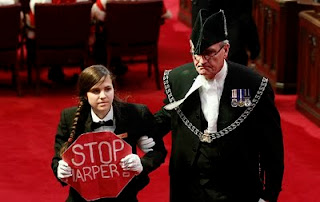 A 21-year-old page has lost her Senate job after walking onto the Senate floor during the speech from the throne to protest Prime Minister Stephen Harper, an action unprecedented in modern Canadian parliamentary history. Brigitte DePape, a recent University of Ottawa graduate, carried a sign reading "Stop Harper" and walked out in front of Gov. Gen. David Johnston as he read the speech Friday afternoon.
In a press release, DePape said: "Harper's agenda is disastrous for this country and for my generation. We have to stop him from wasting billions on fighter jets, military bases, and corporate tax cuts while cutting social programs and destroying the climate. Most people in this country know what we need are green jobs, better medicare, and a healthy environment for future generations. Contrary to Harper's rhetoric, Conservative values are not in fact Canadian values. How could they be when 3 out of 4 eligible voters didn't even give their support to the Conservatives? But we will only be able to stop Harper's agenda if people of all ages and from all walks of life engage in creative actions and civil disobedience."

Her action clearly demonstrates the frustration of many of the 61% of Canadian voters who voted against Harper's ideology-driven agenda which puts neo-conservative ideology ahead of any fact-derived vision for Canada.