I just wanted you to know that my favourite politician is Stephen Harper.
Posted by George Wolf at 13:47 No comments: 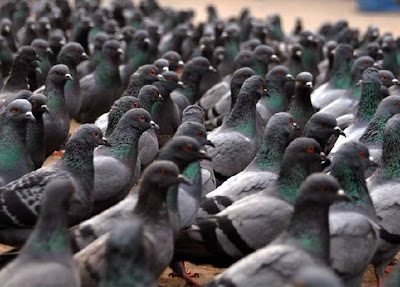 With breathless anticipation the crowd awaits

the unveiling of the Stephen Harper Statue.

Conservatives deny party focus of robocalls probe.
Postmedia report says Elections Canada investigating access to party's internal database.
Two weeks before the one-year anniversary of the May 2, 2011, election, an investigation into fraudulent robocalls has moved to Conservative headquarters, according to a media report.

Postmedia reported Monday night that Elections Canada investigators are looking at the Conservative Party's internal database to see who downloaded a list of non-supporters in Guelph. The report says the database seems to be missing entries that could identify who accessed the list."

This is the beginning of a story about the suspected Conservative Party election fraud strategy during May 2011 recently posted on the CBC News' Politics website pages.

Occasionally I comment on some of these stories, as you can see from earlier posts here.

My comment for this story was just three words:

Other readers then give a "thumbs up" or a "thumbs down" to judge your comments. My results for this comment are the greatest yet.