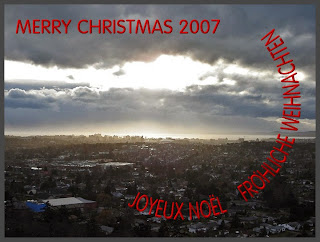 On December 16th, 2007, when most of northern North America was being inundated by huge amounts of snow, this is what it was like here in Victoria. Every year I take a photo as close to Christmas as I can and use it as my e-mail Christmas card to show family and friends in the East and in Europe and South Africa why I now live here. This photo of downtown Victoria was taken from Mt. Tolmie, one of two in-town "mountains".

Don't be fooled by my use of "Christmas". It's just a more common way of saying Winter Solstice. And it's true, we've turned the corner - the days are getting longer (but weather-wise, who knows what still awaits us during the next 10 weeks or so).
Posted by George Wolf at 16:07